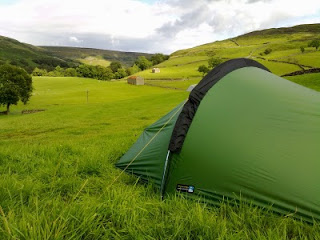 The guide books describe three routes over Hartley Fell, and on-site notices request walkers to avoid particular paths depending upon the season to allow the surface to recover - it's a boggy place. I chose my own route, partly, following a wall south to emerge onto the road near the county boundary, my feet dry and boots fairly clean.

Upon entering North Yorkshire, I received rapturous applause in the form of great rolls of thunder. I had seen the wall of rain heading toward me, and those nearby, blasting away at grouse on the first day of the shooting season, may have wondered why my sudden sprint until, if still watching, they observed me get the boundary photo I was intent on before the heavens opened.

Coast to Coast gossip has it that the shooters pay £37,000 for the privilege. Judging by all the quality cars in a full layby, the parties that I saw would be able to afford it.

I'd been pleased to see signs along the approach to Keld encouraging walkers to spend the night at Keld Bunkhouse, which is also a campsite. This was a camping night for me so I was drawn there, arriving at 3 o'clock. No food or drink till 6 o'clock, no sense that the lady I spoke to wanted my custom, and worries that the overcrowded site so close to the beck might be noisy and midge infested, I continued to Park Farm, in Keld proper where there is a campsite (Rudkins) and Tea Room.

I spent the night on a quiet pitch. Keld Lodge, the coverted YHA, was a short stroll away away where there was good Coast to Coaster company, food and beer.

There were only five other tents on the site (The farm has two sites - one, mine, is next to decent public conveniences and was midge free - not many level pitches though. The other busier site is adjacent to the Tea Room, closer to the showers/toilets and beck/midges). My neighbours were a backpacking couple - the first that I have met that are, like me, carrying everything. All others are using one of the using the luggage carrying sevices.

Sorry if I disappointed you Brian (at Park House in Keld). We did have a large group this weekend, but they were all serious long distance walkers, and certainly not noisy!

I'm afraid we don't do food here all day, we do breakfasts after 8 (unless pre arranged before) and evening meals after 6pm. We aren't a cafe, we're a campsite. I think I did encourage you to use our neighbour's tea room, and we're glad you enjoyed your experience there.

The midges all around Keld are bad on certain days. We do have midge magnets here though to try to ease the problem for our campers.

Thanks for your comments Heather.

Perhaps I was bit harsh but it was how I felt on the day. I have a pet "like" - good marketing. Yours, by way of notices on the path leading to Keld, are good examples and I was suitably impressed. They don't, as I recall, indicate that the service you provide is restricted to certain times during the day. So, I was a bit deflated to discover upon arrival that nothing was on offer until 6 o'clock.

I'll return to Keld one day. If you have a pitch, and will still have me, then I'll look forward to seeing you again.