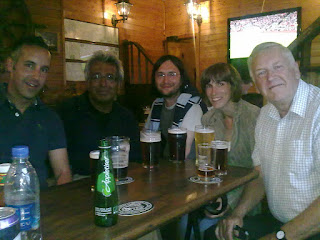 Leaving the B&B in Grosmont, the owner said considerately, "Take your time up that hill." Thirty minutes later I realised just how considerate he had been. It was a breathtaking start to the day, but a climb, I noted with satisfaction, that would have taken me twice as long had it been on the first day of the walk rather than the last.

The plan had been to consider camping at Priory Farm overnight despite it's appalling reviews. But Bryn, aware of my concerns, had secretly booked a B&B. Revealing the secret at camp breakfast that morning was a great and welcome surprise.

It felt as if we had completed The Coast to Coast when we reached the cliff top above the North Sea. But really it ended with celebrations in The Wainwright's Bar, by the shore in Robin Hood's Bay.

To especially: the lovely family of five from London who, impressively camped every night; Anthony a really nice guy who, remarkably, completed the walk after most complicated heart surgery; Markus & Andrea, a very special couple from Germany; Jane & Mark, who led the flock over Kidsty Pike; Bryn, who put up with my teasing; and the many others for contributing to my (almost total) enjoyment of The Coast to Coast Walk - Thank you!

That's it for now but I'll post a final piece next week, when my kit is washed and packed ready, hopefully for another walk as good as this one.

Congratulations Brian, you seem to have enjoyed the walk and met some great people on the way.
I know that my car doesn't like visiting Grosmont, having been there many times before for other reasons!

Enjoyed following your final week on this blog. Great to see everyone together at the finish line. Think Jane and her friends finish tomorrow.

Thanks J, Martin. Look forward to catching up with your blogs.

Thanks David. Always nice to get feedback.

Great to hear from you Mark. I have an undeletable, fond memory of a happy time in the pub at Orton where you make everyone laugh with your comment about "Muscles!!"

You may remember that we met on the various banks and compared notes. you gave me the address of this blog. I have looked at your gear list, which is very helpful. It will help me to be more critical when i get ready for the next trip. You take a lot less in the cooker and food dept, and 1.5kg less for the pack and tent- though I will live with that.
I was at Scarborough on Friday evening and did the Helmsley-Boltby section on Sunday, though I didn't go to Filey. The coast walking is excellent.

I enjoyed our chat Duncan, and learned some too. That night, a very windy one, I was thinking about your Hilleberg but the TN Laser Comps did us proud.

I agree with you about the coastal section of The Cleveland Way, and note that you made good time to reach Scarborough on Saturday.

Hi Brian,
Great to see that we all completed it - it was lovely to see all the signatures in the book in Wainwrights Bar when I finally got there. I got home yesterday and have some great memories of sharing stories in various pubs and while walking. I'm looking forward to browsing through your blog here... I'll also be chasing up that novel! The big question is - where next?
Lovely to meet you,
Jane

Lovely to have met you too Jane. I hope our footpaths will cross again one day.

The same big question for me. You've got me very interested in Hadrian's Wall and further north.