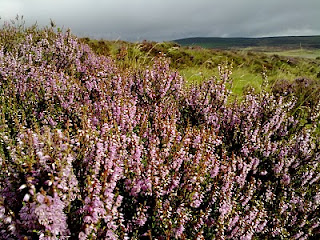 A relaxed start today for a walk that was short and easy when compared with yesterday's; over sixteen miles then, about eight today.

The route was across rolling farmland and open moors where the heather will be in full bloom soon. It's probably waiting for the sun as we Coast to Coasters are.

Priorites are changing - the route, food and shelter are what the days are about. What day and which - fourth? fifth? - it doesn't come readily. But time enough to get to know a few other Coast to Coasters as our paths cross, walking together occasionally, passing or being overtaken.

In the pub at Orton this evening, I had dinner with Anthony from London. I'd first met him at Angle Tarn on Day whatever. We sat next to Markus & Andrea from Germany who I walked most of today with. Jane & Mark from London, who led the way over Kidsty Pike, joined us. A happy, slightly scruffy crew swopping news of other Coast to Coasters ahead or behind us. I was in good company, washing down steak pie with Jennings Cumberland Ale. All saddened though by the cautionary sight through the pub window of a two chaps getting into their lift home - the scuttlebut being that one had injured his knee.