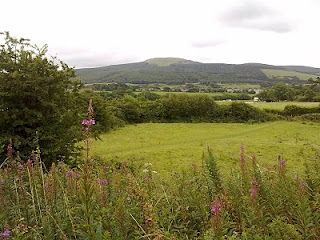 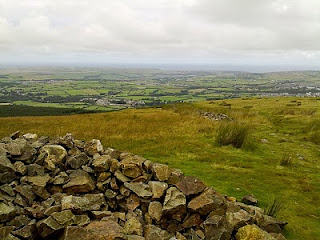 It was an RAF Tornado that woke me this morning, or so I thought until I realised that its engine roar was not receeding into the distance, so it had to be a Harrier, hovering. It was neither. I was a wide awake now. Peering through the curtains I could see that it was thundereous rain, shed loads of the stuff, happily on the other side of the double glazing.

The double glazing of a lovely room in an excellent guest house in St Bees; The Tomlin Guest House which I can highly recommend. "Early breakfast?" "Yes. At what time?" So enabling an early start, and in fine weather, the dawn downpour having moved on or spent.

It's a low level walk to Ennerdale Bridge except for the inappropriately named Dent (1000 ft approx); "Bump" or "Lump" would be more fitting. It's a simple haul up to the summit but a fright awaits on the other side. The descent to Nannycatch Beck is worryingly steep.

All in all though, an enjoyable walk. To be rounded off shortly with lamb chops, washed down with Jennings Bitter here at The Fox and Hounds. Then into a routine of early to bed, especially tonight as I make the most of a soft mattress and crisp sheets. I'll camping out for the next three nights.

Pic 1 is Dent from the outskirts of Moor Row & Pic 2 is from Dent looking NW - Cleator, Moor Row with Irish Sea beyond (if image quality allows you to see that detail).