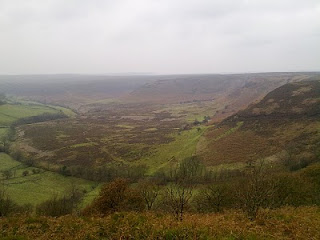 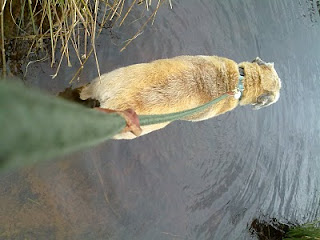 Walking across Levisham Moor today (Wednesday), I was reminded of Max Miller (the celebrated comedian, Cheeky Chappie) and his story regarding Albert, a farmer, ploughing a field when his plough broke. Wondering what to do, and desperate to finish the job he thought; "I know. I'll drive down to Joe's farm - he'll lend me his plough." So off he went on his tractor.
After a while Albert had second thoughts; "What if Joe is using his plough? Then this will have been a wasted journey." (A worrier, Albert.) "Still, best to give it a go." he decided, continuing.
A while later he had more doubts; "Joe's a fussy one. Cautious to lend me the plough, he might say his is broken too." "Well I'm half way there now so I might as well carry on."
Further on and further doubts; "Maybe he just won't want to help me out. Joe can be that way at times." Nevertheless, he drove on.
Then, shortly before arriving, Albert thought; "There's no way that Joe is going to lend me his plough. He's always been that sort."
Arriving at the farm, it was Joe that answered the door, but before he could say a word, Albert shouted; "Well you know what you can do with your bl*!dy plough!" and stormed off.

My version and telling of that joke won't, of course, do justice to the way the great Max Miller told it. But it was brought to mind because, like Albert, I didn't know if I would get what I wanted when I arrived at my destination - The Horseshoe Inn at Levisham in my case. It all depended upon whether or not dogs were allowed on the premises, and I hadn't checked beforehand.

Dogs are allowed in and we both got a very friendly welcome. Holly had a rest by the fire and I got the hot soup and half a pint of Black Sheep Bitter that I had hoped for. Then we returned across the moor on a dry but very windy day to the Saltergate Car Park on the A169, me wondering what to worry about next.

Thoroughly enjoyed that!
:)
Black Sheep too.