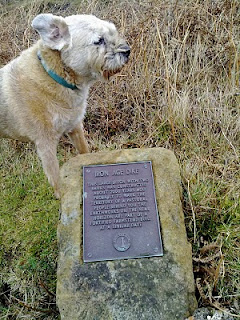 There are more Duchy of Lancaster No Parking signs in Goathland than anyone could point a walking pole at. So, unable to find a decent spot to leave the Grampervan close enough to today's objective - Two Howe Rigg, just south of Goathland, I returned to what has become my forward operating base - Saltergate Car Park on the A169. Ryedale District Council's sign, unlike the aforesaid pesky Duchy's signs, welcomes all. And a particular benefit at this time of the year is that there aren't many "all".

Cross over the road and be not careful and you will fall into The Hole of Horcum! (I must remember that one to frighten the kids or put a curse on a Duchy).

We were careful and made it to the bottom of the hole, then along it, up and around the other side of it. You'll just have to look at the map to see the easy route we took.

I wouldn't like to guess which is the oldest - the bridleway running generally north east from Levisham and partly alongside The Hole (the very same that we trod yesterday) or the dikes that abut it. However, the dikes were constructed about 2000 years ago. In awe, silenced and humbled, I took shelter there, reverently, trying to take in the enormity of two--thousand--years! Which was very tiring so I polished off my cheese sandwiches and hot chocolate.

There's pro's and cons about filming a TV series in a small village. It might be a while, but lets hope Goathland gets back to normal sometime. I've lost count of the visits I've made here but the one time I stopped here in the car (ok, it was 3pm), parking was extremely difficult.
I must visit The Hole sometime for a bit of solitude.
I was wondering as I relax in the picture that you paint if the Centurions had cheese sandwiches in Roman times !!

Isn't the owner of the Duchy of Lancaster own "Er Madge?" What is she doing saying we "can't park there" We pay her wages, we do! We shouldn't be paying her to stick no parking signs all over the shop!

Someone should take our Liz to one side for a little bit of a chat...

J - When in Horcum, the Romans probably did as the Horcums did. So they probably had the odd Butty caseus.

Alan - Off with our heads!