It was a peaceful drive home. Most people still in bed presumably, on a clear, dry day with the sun dazzlingly low on the horizon. I was content to have had an enjoyable short break away from home. There had been a couple of surprises too – The Pennine Bridleway being the main one.

I'm prejudiced. It’s the sort of route that I would avoid, especially so given the statement in a National Trail website that it is a “purpose-built long distance bridleway for horse riders, mountain bikers and walkers”. I don’t see how it can be considered “purpose-built” if it makes use of existing highways. Admittedly, I’m splitting hairs, and I accept that some footpaths may have been converted for other users, but the implication is that it was built for horse riders, mountain bikers and walkers – in that order; sufficient to ward me off.

That's because, regrettably, some mountain bikers bring out the Grumpy Old Man in me. It’s hardly relaxing walking a path with the threat of one or more cyclists bearing down on you at speed. I could go on, but I won’t, other than to say that I suspect few cyclists are aware that (as well as it being good manners and a safety issue) in law, they can only use a bridleway provided that they give way to walkers and horse-riders. Rant over, as they say.

There was no need for a rant in this case anyway because there were no cyclists on the sections of The Pennine Bridleway that I walked. None on the Monsal Trail either although I’m sure that that route would attract many, quite rightly, in finer weather. 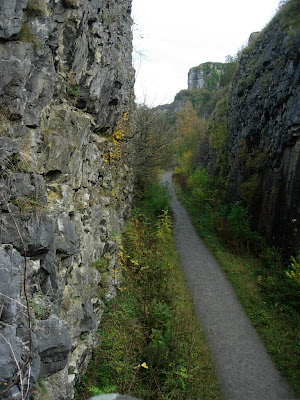 In fact there was hardly anyone around at all, which was the other surprise to add to that of my enjoyment of The Pennine Bridleway. It was almost exclusively just me and Holly. I hope it wasn’t because it had been put about that a Grumpy Old Man was visiting the area.

I get angey when cyclists are using footpaths and even then, they refuse to make way! All they need is an accidentaly well placed walking pole throught their spokes to disuade them...

Your method is more effective than mine.

I prefer to encase my feelings in a mind-powered megatrox bum-seeking missile which I release through my outstretched pointy forefinger.