Holly, my dog, is a sprinter rather than a long distance walker. That’s just fine for what she wants to do - a swift burst to chase a squirrel or a rabbit. It’s not ideal for me though. I would like her to accompany me on long walks. Indeed, that was the main reason for getting her in the first place. However, Holly has never shown an aptitude for that. 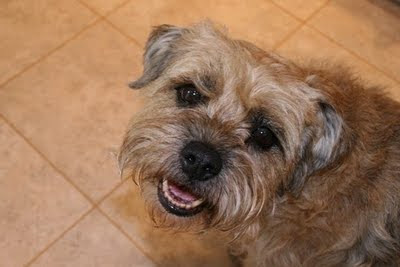 She’s a Border Terrier, a type of dog originally bred to kill foxes and vermin with breed characteristics nowadays which seemed right for my purpose when choosing her ten years ago. She loves to be out and about but not long out and abouts. In hot weather she seeks the shade and shows how stubborn she can be with her “On yer bike!” look. Understandable really, given that she like all Border Terriers has two coats. It’s not such a problem in the cold. And “wet” is ok, so long as she can choose when, and then only, if she can sit in it. A muddy pond, chrystal clear river or salty sea - it doesn't matter. Just cold and wet.

I don’t believe the old adage that you can’t teach old dogs new tricks. I might agree that it can prove difficult to change old tricks and break old habits but it seems to me that new tricks can be learned at any age. It’s time to put Holly to the test.

If it’s a typically cool Bank Holiday weekend this coming weekend then I hope to go camping with her. A short coastal walk appeals to me, where compromise is the order of the day. She can cool down in the water when she wants, allowing me to take a break and read my book. Beaches tend to be squirrel free too.

She has a mistress called 'Peewiglet' and you can read about her exploits on the Dales Way recently over at her website http://peewiglet.wordpress.com/

Looking forward to hearing more of your travels, Holly.

After reading the cheerful account of Piglet's (and yours and friends) most excellent adventure I'm looking forward to camping with Holly even more now.

Aha! I see the blog has a new name - I shall nip back to my blog and get it changed on my 'Better Places to Visit' list immediately!

I liked the pictures, by the way - made it come 'alive'.