The idea, or basic plan, was, to set off early from Leek, spend a couple of hours with sister and brother-in-law, leave Holly and continue to Keswick, plug in the Grampervan, then, after a swift pint in town stroll toward Latrigg and back before it got dark. You’re probably ahead of me; yes, the plan came unstuck in town – in the Dog & Gun actually where they stock a delicious golden bitter, Thirst Blossom which is brewed here at the Keswick Brewing Company. And long may they do so.

I wasn’t much use for anything after that but a good sleep which I attended to fairly early and have paid the price by being wide awake since 03:15 hours. 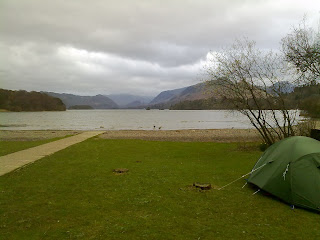 At this campsite, those in tents can pitch up-close to Derwent Water and are rewarded with fantastic views as you can see from the image above. It’s £9.30 a night for me here although added to that, as I forgot to mention yesterday, is the annual club subscription, the amount of which I have also forgotten. It’s an age thing.

A bit of walking today and, well, I’ll just see how it goes.

I'd go back to the Dog & Gun. A good stroll from the campsite - with plenty of fresh air.
You could try the gear shops too. Fischers has quite a climb up the stairs to get to the top floor...
Just sayin...

I did. And will again. Makes me feel better you said it too!

I always seem to go at the wrong time of year when The Dog & Gun is packed which is another reason why I haven't been able to wake up to that marvellous view either, nice one.