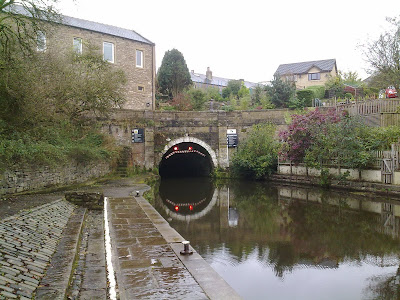 A reluctant start this morning. Did I really want to watch the England v France Rugby World Cup game or was I looking for a way to delay the inevitable - setting off on a wet, miserable looking morning. After 10 minutes of play, England's prospects didn't look promising to me. I deserted them, creeping away, taking my chances with the weather.

A short walk down the A56, then across some fields and I was back on the towpath. Only for a mile though, as far as the Foulridge Tunnel. It's almost a mile long (1640 yards) but without a towpath so I took to the road, though Foulridge, skirting a reservoir, returning to the canal around Barrowford Locks.

My overall surroundings today have been the expected opposite of yesterday's; from peaceful open coutryside to the dreary looking merged towns of Colne, Nelson and Burnley.

My final mile today was along the Burnley Embankment. Known locally as the Straight Mile, it carries the canal 60 feet over the roof tops of Burnley. The Embankment is a remarkable engineering feat, one of the wonders of the waterway. One day, I thought, as I made my way down into town, we may be able to engineer better weather.

I'm sure you were in ALL our thoughts yesterday - the weather was truly awful, my 4 mile walk along the Bridgewater Canal towpath certainly tested my old goretex jacket.

Just to keep you i the loop & cheer you up, it was jolly nice weather daarn saarf...

Liverpool to come, eh? You sure pick 'em!