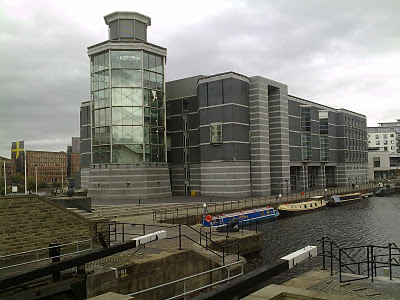 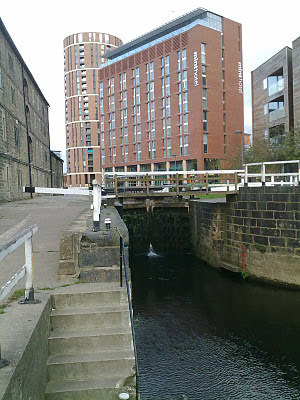 The Leeds and Liverpool Canal starts where it joins the River Aire at Granary Wharfe, Leeds city centre. The canal is 127 miles long so I guess that the tow path is about the same length. If you include branches then the canal, at 141 miles, is the longest in the country. It's part of a through route from the North Sea to the Irish Sea via the Aire & Calder Navigation. Construction of The L&L Canal was begun in 1770 by engineer John Longbotham.

Granary Wharfe, like other areas along the waterfront, has undergone extensive regeneration recently. The Royal Armouries Museum, beside the Aire, is purpose-built and houses an absolutely fabulous collection. (Full body armour actually worn by Henry VIII! Amazing!)

And so, this morning, I set off on my stroll - against the flow of: pedestrians hurrying to work in the city centre, cyclists commuting, morons on bikes biking, (I'll try my best not to moan further about cyclists), the blustery (warm) wind, and, as it happens, the water.

I had lunch at The George & Dragon, Apperley Bridge (8+ miles), a nap beside the canal a mile further on (drowsiness brought on by the lunchtime pint of Bulldog Brown I reckon) and arrived Shipley at 15:30.

I could have walked much further but for the strong complaints being transmitted from soles of feet to brain. Ankles up I'm better than fine.

Image 1: The Royal Armouries Museum.
Image 2: River Lock - The start of The Leeds and Liverpool Canal.

Go on..! You can moan further about cyclists commuting or morons on bikes biking....I promise that I will still read your blog.!

No, I'll refrain best I can Trevor, keeping my happy head on and like you, I hope, not take it personally.

There's nowt wrong with (most) cyclists - it's the inconsiderate minority that give the (unnoticed) majority a bad name.

I'm enjoying your blog, I hope the weather improves for you!

John, you're right of course. Lots of riders in the Leeds area but reduced numbers since, plus I've wound my neck in.

A great idea. I know it's of little consequence but I remember doing the first couple of miles to Armley Mills with a social group about 10 years ago, so I have a vision of the terrain in my head.

How about this for a design for a wall painting, in the tried-and-true Art Nouveau style?: http://EN.WahooArt.com/A55A04/w.nsf/OPRA/BRUE-8BWN3L, by the famous English artist, Audrey Beardsley himself. You can also order a canvas print of the picture from wahooart.com.