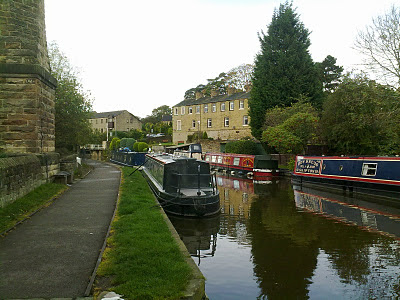 Barnoldswick, known locally as Barlik, is the highest town on The LL Canal. It sits about 490 feet above mean sea-level - the highest point on the canal, which I will clamber over tomorrow, is 5 feet higher.

Three other things about Barnoldswick:
1. It is one of almost longest place names in the UK without repeating any letters (Buckfastleigh in Devon, Buslingthorpe in Leeds and Buslingthorpe in Lincs, with 13 letters, are the longest).
2. There's only one B&B in town.
3. Today it was closed.

So, finding accommodation this evening wasn't so easy. A bit more legwork was required. First stop the cafe for their last portion of home-made meat & potato pie with mushy peas, pickled red cabbage and gravy. Second stop the wine bar (all pubs, none of which do b&b, were closed) for a pint of bitter. And where the barmaid helped me locate a b&b via her friend's Facebook. Third stop, a bench in the town centre where I chat with an elderly lady who didn't know she lived in a town with one of the largest place names etc, but who didn't think Barlik, with six letters, was very long. Fourth stop the taxi rank - had enough of walking (and Barlik) - for a lift to The Old Stone Trough, an inn, 2-3 miles distant.

I have an executive room, reduced to £50 (which includes breakfast). It's in an annex, out of earshot of the main building where a live band will play tonight. Executive class rooms are larger than Club class, have bath and shower, and heating controlled by the occupant. Club class are smaller, have shower only, heating as is, and because they are in the main building, loud music - Oasis sound I'm told.

What else? Oh yes - I walked a bit, today mostly through Dales-like scenery, passing the time of day occasionally with people along the way. Enjoyed a pot of tea at The Dalesman Tea Rooms in Gargrave which is on The Pennine Way, a village I have visited before when walking the aforesaid National Trail, but for the life of me, it's a place that I cannot recall any memory of,

This is not a day I will forget though. It'll be stored in the easily accesible Fond Memories section.

Sounds to me like you're having a rare old time: Yorkshire Dales, chatting up ladies, barmaid's Facebooking for you... and walking too!
So - it's all downhill from here then! Easy, fella!

Wonder what makes you think 'twas I wot was doing the chatting up? And yes - all downhill now. Thinking about getting a bike .....

Scenic & friendly as it is, it looks like Barnoldswick looks like a place to avoid !! ... I suppose that's the fun of the adventure though.

Was the Youth Hostel at Earby not open? I stayed there on my c2c walk.

J: No - sorry if I've given wrong impression of Barnoldswick. Everyone I spoke to were decent, helpful and friendly. The cafe/pie was good. Unlucky with pubs I guess and no response from B&B at this time of year may be normal - on holiday or no vacancies even.

Ilona: Fair point. Didn't have my thinking cap on I guess.(The Tourist Information Centre, which tourist signs in the town point to, and whose employees might have suggested the Earby YHA, is a desk in a Council Payment Office which has a an A4 laminated sign on it stating that the TIC has closed down - see my whinge elsewhere on this blog.