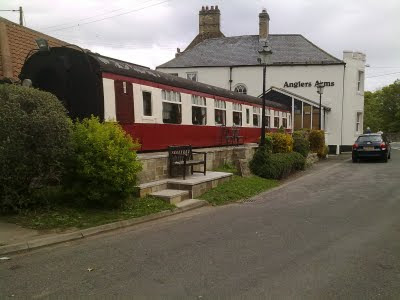 My day started with an owl and finished with black sheep. It felt like a long day because the owl was hooting at 04:00 and I was up and about soon after - as were the wood pigeons who woke the other birds for choir practice.

I had a half baked plan today - head for the coast. At 17.5 miles distant that was a rather ambitious target for me. I haven't got myself fit for this walk, this being the bump start for fitness training for next month's walk. And it's a holiday, I remind myself, so dawdle if you wish, which I did. And will.

The route east mostly follows that of the St Oswald's Way, through lush countryside where woods are carpeted in bluebells and wild garlic (stinking onions), fields are crowded with sheep still with their lambs, and swallows (or martins) and gulls swoop over the River Coquet (pronounced co-cut) which is never far away.

Lunch at The Anglers Arms, Wheldon Bridge (see image), where I couldn't help but attempt that old favourite "The Railway goes through the middle of the house, the middle of the house ...", a pot of tea at the cafe in Felton, followed by a swift half of Black Sheep Bitter across the river at The Northumberland Arms, West Thirston, led to another, slower one and the realisation (with the clarity conjured up by the magical properties of bitter) that I'd had enough for the day. Walking that is; plenty more Black Sheep where the first two came from.