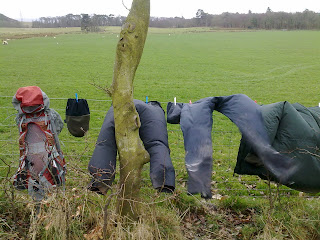 Today's earlier blogs were a bit of an experiment - using the camera. Outdoor conditions weren't what you might call condusive to such activities, however, apart from the evening picture disappearing into the ether it seemed to work.

I had half planned to camp wild tonight but with the odd thing going wrong I decided not to.

Next month I'll be trying out Memory Map so hope to be able to show (and measure) routes. In the meantime here's a brief description of today's:

From Ravenglass (Map OL6) generally NE by footpath (FP) to and then along a short section of A595. Then generally NE on FP over Muncaster Fell (playing silly beggars off route practising navigation) to pub east of Eskdale Green.

Disheartened to find pub shown on map (King George IV) closed and up for sale, so no hot soup and pint.

Continued SE (hungrily) along the road (up Birker Fell) heading for Devoke Water but wasn't enjoying that because of other water falling out of the sky and turned back down to Forge House. From there, generally SW on bridleway (BW) to Muncaster Tarn and the BW (Fell Road) and back to Ravenglass.

PS. Thanks for your comments Alan, Martin. My comments box giving me a hard time so hope you can make do with route description above!