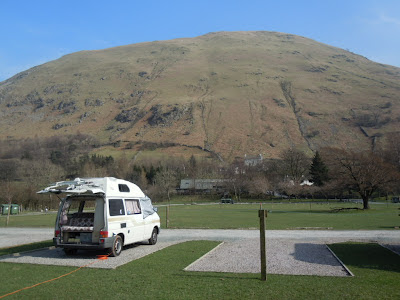 What a lovely morning it is this morning; bright, pale blue sky, everything looking fresh after yesterday’s rain – the perfect morning for, well, lots of things but in my case perfect for planting another row of early potatoes. I dug a trench at the weekend, filled it with farmyard manure and left it open to soak up the rain. I can bury the spuds now.

Yesterday’s rain caused me to postpone a walk though. The planned wander with a friend along the River Great Ouse through Bedford followed by a pub lunch, wasn’t quite so appealing in the damp. You win some you lose some. Rather like my walk last year along The Leeds to Liverpool Canal when it didn’t seem to stop raining.

The weather was a feature of my stay in the Lakes – as it usually is but this time I struck lucky. It felt like August should do but without the crowds. Not a pretty sight but shorts were the order of the day for me, during the day.

I was based at Sykeside Campsite for the second part of the week. It is in a rather special place - Dove Valley, which is overlooked by hills and crags shouting out to be climbed. At this time of the year, out of the tourist season, it was quite a special campsite too because it was almost empty. It’s not that I am anti or unsociable it’s just that I can imagine it not being such a great place when fully occupied; the pitches are closer together than I’ve encountered on this type of site elsewhere, and at a location where there are over 60 pitches for campervans and tents, and an adjacent area for caravans, the Gents only has four “seats”!

Mine was a simple daily routine; basically - up early, a circular walk, packed lunch at the summit of something, nap, pub, bed.

Rounding off the account of the week has become a bit of a mind drag. It should have been a straightforward enough job but with photos to transfer from camera and phone, wanting to make maps into pictures and transfer them from a netbook to pc, and to be in the right frame of mind to write, all contrived to make it a seem a bit of a chore, each day therefore it was left till the next. Excuses, excuses. Or, perhaps I should just not get out more.

So without further ado, and with only the one image (of the campsite I shared with a few quiet humans and a small flock of sheep), I’m taking the easy route. I’ve got spuds to plant so I’ll publish and be damned. Kirk out.

Over the years I have used the Sykeside site on a number of occasions....as you point out,a great site out of season but mighty busy in August...

Trevor: If I make it in the summer then I might chance an overnight stop at the car park by Cow Bridge (NW of Hartsop).

Danny: Yeah - something to do with nitrogen and acidity I believe.

All camp sites are getting busier Brian. Cheap large tents are putting camping back on the map for families unfortunately.
I say that, not that i dislike family camping it's just that there are so many families who don't respect other campers. I'd better stop at that.
Keep high up and secluded.