The weather changed for the better during the second half of my trek so I made it to the top of Skiddaw and back to Keswick on a fine, dry Tuesday. That was a clear day too which provided for fantastic views. It was very hard work though - 8 miles from the town centre and back which took me six and a half hours, including a 20-30 mins lunch break on the summit and a lot of breathers on the way up and down. 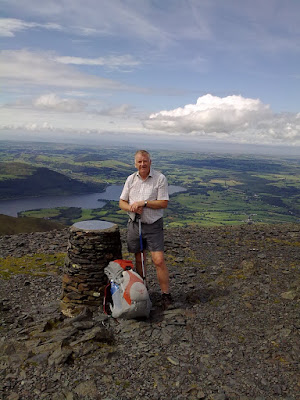 Skiddaw (3054 ft but it felt like more)
My path from Gawthwaite to Keswick had been along The Cumbria Way. The rest of the walk to Maryport, via Bassenthwaite where the Sun Inn pub is attractive, the beer decent and the food not so (I would not recommend the Steak in Ale Pie), was in glorious weather and by way of The Allerdale Ramble which is shown on the OS 1:25,000 map.
The camp site near the village of Bassenthwaite was surprisingly quiet. Mainly statics, there were a couple of tourers and two, maybe three groups camping out of cars. I was the only backpacker and I set up near the washroom/toilet/shower block. At £6.00, it was a better stopover for me than the Great Langdale National site. 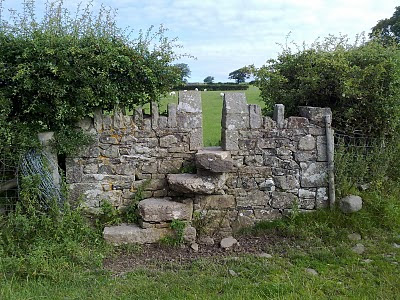 Stylish stile north of Cockermouth
The aim had been to walk hard in preparation for the Coast to Coast which I start next week. I'm certainly better prepared except that my knees still hurt and I'm not sure why. I'm not entirely sure why I am walking the C2C either but think it is more about doing it to have an opinion on it and as a challenge. Walks over 10 miles (in the Lake District) demand a lot of me so the C2C will put me to the test.
There will be some changes to my kit for future walks.
I realised last year that my Snugpak Softie 6 sleeping bag was not for me but I made do. It's warm enough but I feel too restricted in a mummy shaped bag to get a good night's sleep. I'm expecting a much improved slumber and sweeter dreams in my new Golite Adventure 1+Season Semi-Rectangular where I can move around in the bag rather than with it.
There'll be more to say about the Golite sleeping bag and other additions to my kit (including an Icebreaker merino wool polo shirt and the Pico Solar Charger) in the near future. 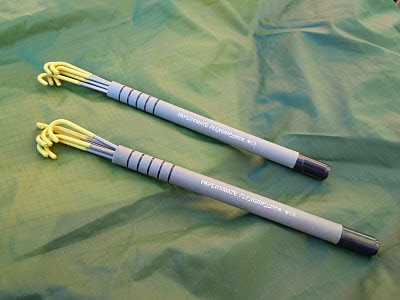 I'll be camping and B&B-ing later next week. I have no place booked to stay, or even in mind, in Grasmere so I may change that part of the route to avoid that fair town. I'm not sure about the blogging either because my phone is still to be sorted. A bit like me all-round really.

Good luck on the C2C, got my fingers crossed for you. Looking forward to reading what you think (and of course seeing the snaps), it is supposed to be amazing. Sorry to hear about the knees, I hope they hold out for you.

Skidddaw is a fantastic mountain. Have a great C2C Brian.

Thanks Dude, Martin, for your good wishes.

Hi Brian,
Only just found your blog. Great idea using the biro’s as storage units. Never thought of that myself but i will use it in future.
Nice little pocket knife that Rueben has too, what make is it?

Sharp little beggars those Terra Nova pegs. The knife is too and Rueben loves it. It's a Gerber STL 2.00