Fresh crab meat had been on my mind for a while. Since last month in fact, when walkng through Whitby. Now though, I can happily report that said crab meat is off my mind and in my stomach. One unlucky creature having been consumed earlier today in Cromer, Norfolk. 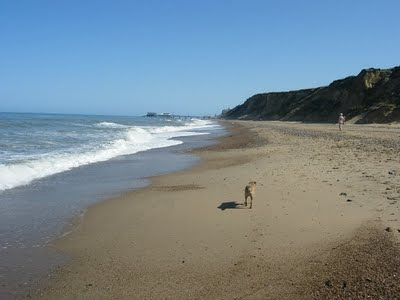 We - that's me and my dog Holly - are camping midway between Sheringham and Cromer where the balmy peacefulness of a glorious late Summer evening is breaking as fellow campers stir ino life following their afternoon siesta. Thoughts of food no doubt on their minds now as they make plans for the evening.

Holly doesn't know it yet but we head down the coast again shortly. Not as far as Cromer this time though. My appetite for crab meat and a coastal walk has been satisfied. The pint or two of bitter that I now have in mind are closer to hand.