“Is it far to the flatlands?” the young girl asked. Then adding, whilst waving a damp, crumpled map, “We’re lost.” She was leading a ten-strong group of her peers down the footpath below Causey Pike (OS Grid NY 217202). It sounded more like a veiled plea to “beam us out of here” than a statement of fact. Conditions weren’t pleasant at that time, they were tired teenagers, their jangly rucksacks were weighing them down, mobile phones and ipods were but distant memories; they were, in a word - miserable. “Not far.” I said.”And you’re on the right track.” I couldn’t believe there was anything, other than immediate access to a Star Trek Transporter, that would lift their spirits so I wished them good luck, safe in the knowledge that in years to come most of them would smile as they looked back at the great time they’d had in the Lake District. It happens. 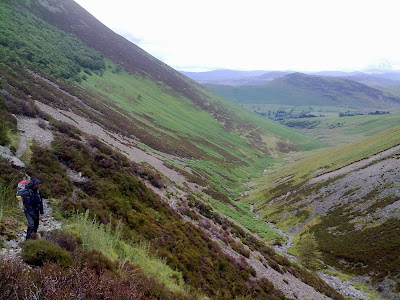 Catbells - viewed from below Causey Pike

We, meanwhile, continued up, over and down to Buttermere.

Buttermere, the lake and surrounding area is beautiful. Buttermere, the place, was disappointing. The Bridge Hotel and The Fish Inn get the thumbs down – hospitality is not a word in the vocabulary of those that I encountered who work there. The village campsite didn’t meet expectations either so we gave it a miss. In the event it would probably have been better than the Dale Garth campsite, halfway down the lake, which was even less accommodating, and certainly not as welcoming as you might expect after visiting their website.

It seems such a shame to me that those who have the opportunity to provide hospitality, food and shelter can do so in such a pathetic way and yet the public still pay up. Shame on me then for using the facilities such as they were. We should have walked on and wild camped. I should have heeded Bryn’s advice and “Let it go over my head” as well. Instead, I metamorphosed temporarily into Mr Grumpy. It happens. 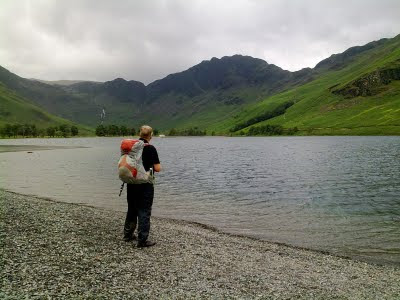 Looking toward Haystacks from Buttermere

I remember seeing a mountain rescue in Rigg Beck near the spot in first photo last year from the grandstand view of Ard crags. Thanks for the advice on Buttermere, it's not a place I've hung around for too long after a walk.