Cantonese is a sing-song language. Unaccountably, I love the sound of it. Not that I would have the faintest idea about what was being said. It's just so appealing. In the jumble of sounds there's a flat "a" - similar to the sound you would make as the sides of your mouth rise into a smile to say Cumbrian "path" rather than The Thames "Parth". "La la laahh" - the last word stretched out and at a lower frequency. La la laahh. It's what I am reminded of when I say Shangri-La; "Shan gri laaahh ..". Ahh so - perhaps now you know what I'm on about. Yes - my shelter has arrived. My very own GoLite Shangri-La 1 [*Initial comments below]. She's the 2009 version in evergreen rather than the Chinesey bamboo (yellow). She looks like a Helen to me. 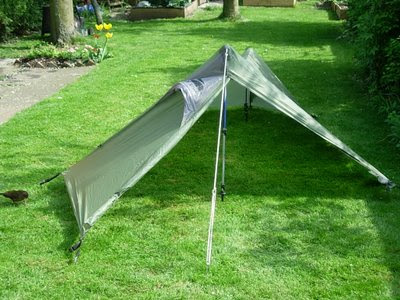 Agnes is here too. Big Agnes Clearview Air Pad, who weighs in at 460g (plus a net bag at 15g). It should have been the lighter Mummy version (a minimised, Egyptian Mummy shape) but the on-line supplier sent the wrong one - a Rectangle; that's not an insulting description of the supplier, it's the shape of the pad. I had the option of returning it but my impatience won the day when I just had to try it out on my living room floor. I can live (for the time being) with the extra couple of ounces.

It takes a little more that a dozen big puffs (no sniggers at the back please) to get the pad into shape. Worryingly, then amusingly, it hisses slightly (like Gollum in the book) as your body changes positon on its surface. What a treat though - to move on to my side and not feel my hip touch the floor. Excellent. Impressive for the brief spell on the hard level floor of my living room. I'm hopeful it performs as well overnight on a less even pitch.

* Shangri-La 1. The shelter is supplied without guys but I prefer to use some front and rear so I have borrowed two from elsewhere. It came with six pegs but I have supplemented them with another three; two for my guy lines and one for the open door flap. The tops of the issued pegs are quite sharp, so they dig into the hand as they are pushed into the ground. I will be swopping them for another type of peg.

The poles inside the tent are 7' (feet) apart. The high point, inside at the front pole is 3' and at the rear pole 2', although the height can be adjusted somewhat by raising or lowering the poles - walking poles in my case. There is a 7' spread between the two front pegs and a 4' spread at rear. The tent's front flap, shown open in the photograph, can be sealed closed with what seems like a strong zip.

It's easy to fold the shelter and slide it into its small sack.

In case you noticed/wondered - that's a blackbird near the tent. It's pulling out a worm to take back to it's young, in their nest nearby.